Opera on the Cafe Deck during the 2014 Texas community Music Festival!

AUSTIN -- The Texas Community Music Festival is now accepting applications for our 15-minute Showcase Sets, to be performed during the two weekends of TCMF15, April 24 - May 3, 2020 at Central Market North.These performances will be staged on the covered deck portion of Central Market Cafe and feature solo and small ensemble performers. 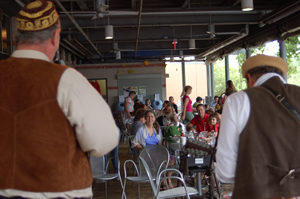 In years past, our 15-minute showcase sets have featured some of Austin's best up and coming songwriters and acoustic ensembles, including Austin favorite Jackie Venson, who was just beginning her career when she and her guitar appeared at TCMF, and performances by the Austin Opera and the One Ounce Opera.

You never know who you'll see performing on the deck at TCMF.

The Texas Community Music Festival is presented by the Austin Civic Wind Ensemble, hosted by Central Market and generously sponsored by Ms. Kat's Music and Movement and Westbank String Shop.