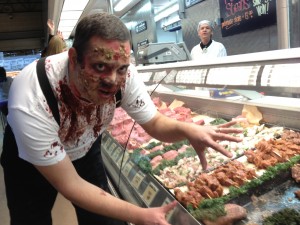 Austin — The Texas Community Music Festival completed  what most would agree was the greatest weekend of community music ever presented Sunday night at Central Market, with an unusal turn of events, as an evening performance was brought to an somewhat abrupt halt when the next band on the program literally invaded the stage. (OK, maybe there was a little planning involved, but the audience was treated to a special moment!)

The program featured a diverse and entertaining lineup spanning the musical spectrum, and introduced several out of town performers to the Austin audience, including songwriter Tami Hix, who traveled from Dallas for a number of showcase performances throghout the afternoon.

Silver Thistle Pipes and Drums kicked off the show – it was their eighth year performing at TCMF – followed by another hard-rocking set by low brass ensemble Trombonium Sinfonium, who traveled from Greenville, TX, to perform at TCMF for their second straight year.  They also were the first band this year to play the pop sensation “Gagnam Style,” much to the surprise and delight of the audience.

Boss Street Brass Band hit the Central Market area with a wall of sound and a ton of funk, as they brought their New Orleans style brass band set hard and loud, recruiting what might have been the world’s youngest spontaneous second line on the CM Cafe patio.

Kunitan returned to TCMF and presented an inspiring set of South American/Andean folk music, followed by Bobby Davis and the Austin Jazz Band, featuring vocals from longtime TCMF favorite Lisa Clark.  The audience was then treated to a fabulous and varied set of beautifully performed brass music by TCMF newcomers Hill Country Brass, members of which traveled from as far away as Victoria to perform. 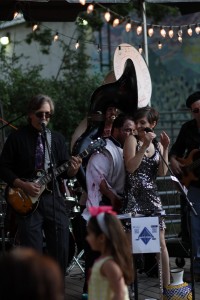 Blue Diamond’s lead singer is bitten by DMCB zombie… ONLY AT TCMF!

As evening set in the Blue Diamonds took the stage.  The nine-piece R&B group made primarily of IBM’ers literally rocked the house with their tight horn arrangements and piercing vocals, and attracted all manner of music lover to the CM Cafe stage area …

including … ZOMBIES, who began to appear one by one around the Central Market area — even the meat market — in their quest for entertainment.   Before the Blue Diamonds could finish their set, their set was overrun by nearly two dozen zombies, Austin’s own Dead Music Capital Band, who may have bitten a few of the Blue Diamonds, but then put on a rousing set in their own inimitable style, leaving music lovers and many of their own body parts in their wake!

A very strange, theatrical and most entertaining ending to a great Sunday at Central Market.  Check our photo highlights on this page as well as on Facebook and Flickr for lots of super photos and video clips from the Eight Annual Texas Community Music Festival!  If you have any photos or videos from the festival you’d like to share, please post it to our Facebook page or email us the link at info@www.new.cecommunications.info

The festival continues at Central Market Monday and Tuesday evenings before shifting to the Farmer’s Market at the Triangle on Wednesday.  Check the schedule page for full details!