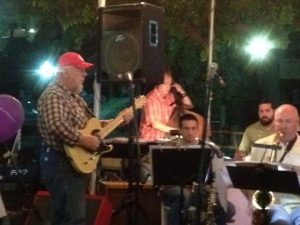 Opening the show, as always, was the Austin Civic Wind Ensemble, the festival host, playing a brisk set of Latin-inspired literature, followed by the Hill Country Community Band of Marble Falls, making their fifth TCMF appearance, and the first visit by solo artist Mat Tuttle.

The Austin Jazz Workshop performed its 2012-2013 program based on the music of Henry Mancini, “The Panther Prowls,” to the delight of the swelling audience, including a rare vocal version of Mancini’s “Theme from Peter Gunn.” The Republic of Texas Big Band, one of a handful of ensembles that have played every TCMF, got the crowd dancing with their set of 40s and 50s big band swing tunes, and the Austin Banjo Club had the crowd singing along.

The Skylarks made their second TCMF performance to end the afternoon before the ACC Jazz Ensemble took the stage for the evening’s main attraction, with special guest, Grammy Winner Redd Volkaert.

The festival continues Sunday at 11am with Silver Thistle Pipe and Drum and features another family friendly program, culminating with a special appearance by Texas’ favorite zombie marching band, Dead Music Capital Band.

Check the schedule page for full details, and make plans to spend Sunday at Central Market at the Texas Community Music Festival.