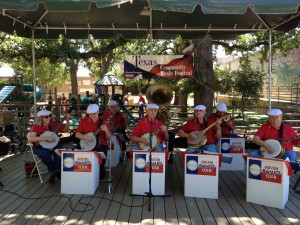 The Austin Banjo Club will be making their fifth appearance in the Texas Community Music Festival. Come see them Saturday, April 20 at 4:00pm, at Central Market North.

The Austin Banjo Club has been playing traditional banjo music in and around Austin for more than a quarter century.

Many Central Texas folks have heard us play on 6th street during Victorian Christmas, at a nursing or retirement home, at a church, at a wedding, a birthday party, at the Farmer’s Market,
or even at a funeral.

We travel to banjo conventions in other states. We have performed as a band as far away as Memphis, TN, Tucumcari, NM, Eureka Springs, AR, Guthrie, OK, and Solomans Island, MD