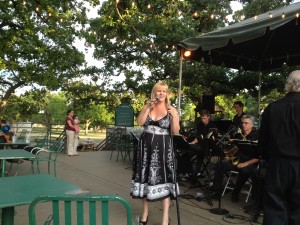 Austin — The Seventh Annual Texas Community Music Festival continued Monday night at Central Market with performances by the Trilogy Clarinet Trio from Marble Falls and an extended set by the Austin Jazz Band.

An appreciative crowd built throughout the evening, enjoying cool temperatures and even cooler musical performances, highlighted by the singing of Miss Lisa Clark, one of the handful of performers who have appeared at all seven TCMFs.

The festival continues Tuesday evening at 5:30 with the Chalumeau Clarinet Quartet, followed at 6:45 by the Hill Country Community Band of Wimberley.  At 8pm, TCMF takes a turn to the darkside, with the first of two performances by the Dead Music Capital (DMC) Band, complete with costume, makeup and LOTS of drums!

For more information on Tuesday’s performances as well as the remainder of the 2012 TCMF, please go to the schedule page of this site.

The Seventh Annual Texas Community Music Festival is hosted by the Austin Civic Wind Ensemble and Central Market and sponsored by H-E-B and Strait Music Company.