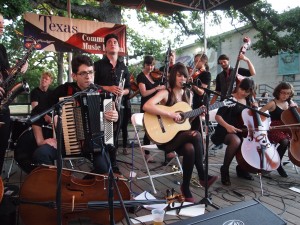 For the second year in the row, TCMF’s first headliner was the incredibly talented Mother Falcon, who played into the night for an overflow crowd; possibly the largest single performance attendance in TCMF history.

The festival was kicked off by TCMF host band, the Austin Civic Wind Ensemble, which brought its largest contingent to Central Market, upwards of 70 musicians!   Following ACWE, the Chaparral Dixielanders got the audience dancing and the swinging continued with the Austin Banjo Club.

The Austin Jazz Workshop, a perennial TCMF favorite, presented its 2011-2012 jazz program, the music of Miles Davis.  The program continued with a beautiful acoustic / vocal set by John Wilson and Friends and a jumping set of Parisian-style Gypsy Jazz from Hot Club Soda.

A special highlight of the first day’s activities was provided by singer-songwriter Debra Jo Johnson, who performed throughout the day on the Cafe deck. Debra became the farthest-travelled performer in TCMF history, driving in from Frankston, in deep East Texas to participate in the festival.

The Texas Community Music Festival is presented by Strait Music Company and HEB, and hosted by Central Market and the Austin Civic Wind Ensemble.